In a previous post on this topic I wondered about the pace of announcement of new amazing possibilities offered by 3D printing. I also wonder how the potential disruptions of 3D printing are ignored or underestimated.

With the new techniques and new printable materials, virtually anyone can become a manufacturer. While this is good news for revitalizing a declining industry, it can mean doomsday for those not paying attention. 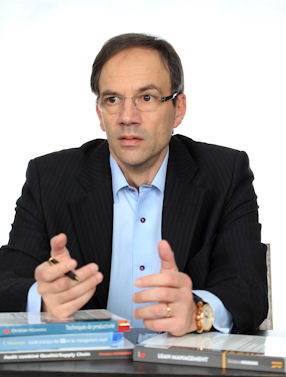 3D printing reminds me Porter’s five forces model for industry analysis and business strategy development. In this model, Michael Porter had outlined five forces that determine the competitive intensity within a market:

Virtually anyone equipped with 3D printer can establish him/herself as manufacturer. This may not bother established manufacturers at first glance, as these new “competitors” may be geeks or techno lovers giving a try on some new toy.

Yes but if 3D printing comes cheap and easy as it seem to come, many households may become small manufacturers for themselves for some parts or products. And if the number of households becomes significant, it means significant amount of turnover swaps from buying finished parts or products to buying 3D printers and raw printing material, users generating added value themselves, at will.

This is not only about producing small widgets, plastic ornaments or cartoon figurines, as I mentioned in my previous post, it could/does threat prosthetics, dentists, podologists and also many other businesses and trades like spare parts for aftermarket, construction, etc.

Threat of substitute products or services

3D printed insoles, dentures and braces already exist, even 3D printed firearms exist as substitutes for the traditional ones, which is not only a threat for gunsmiths by the way.

Some of these new products come with better characteristics (3D printed insoles are allegedly washable, printable in many shapes and color and anti–microbial for instance), many times cheaper and faster.

Furthermore, customers will be/are able to modify the original model to fit their taste or specific needs and print them at will, without holding costly inventories of finished goods.

Services like designing, customizing products or fast delivery simply disappear as taken over by customers themselves.

Crowdsourcing and hacking are other kinds of substitution for R&D, development, engineering, design!

Distributors, instead of providing stocking, cross docking, commissioning and shipping could turn on-demand manufacturers, shifting their risky business to a safer and higher adding-value one. Yesterday’s customers becoming new competitors.

The ability to manufacture replacement parts on demand using 3-D printers could transform the economics of aftermarket service and the structure of industries. Relatively small facilities with on-site additivemanufacturing capabilities could replace large regional warehouses. The supply of service parts might even be outsourced: small fabricators (or fabs) located, for example, at airports, hospitals, or major manufacturing venues could make these parts for much of the equipment used on site, with data supplied directly by the manufacturers.

Customers will gain tremendous power, as well B2B customers as B2C customers, being able to manufacture by themselves or to source parts and products, even services, among new competitors.

What leads us to intensity of competitive rivalry, turbocharged by new entrants, innovations and all kinds of disruptions.

Bargaining power of (surviving) suppliers will also increase as does the position of the last survivors in declining markets. Fewer suppliers means greater power for themselves. This will be true for businesses and trades having 3D printable or additive manufacturing viable substitutes.

It will also be the case for the new manufacturing techniques equipment, specific software and specific material vendors, mastering their inherent properties and/or difficulties.

Initially, these new competitors will be niche players, operating where consumers are willing to pay a premium for a bespoke design, complex geometry, or rapid delivery. Over the longer term, however, they could transform industries in unexpected ways, moving the source of competitive advantage away from the ability to manufacture in high volumes at low-cost and toward other areas of the value chain, such as design or even the ownership of customer networks.

There is no way to stop 3D printer’s home invasion. Though Amazon’s CEO Jeff Bezos believes 3D printing will not change the distribution of products anytime soon, the company sees also the explosive growth of 3D printing. Amazon decided to seriously involve in the 3D printing market by launching a new section for 3D Printers & Supplies under Industrial & Scientific > Additive Manufacturing Products category.

“When it was announced that Amazon would begin selling 3D printers and supplies last summer, the industry heralded it as a defining moment, a clear indication that 3D printing was going mainstream,” says Hauer. “We think the decision to sell 3D printed products sends an even bigger message. Consumer products are the next frontier.”